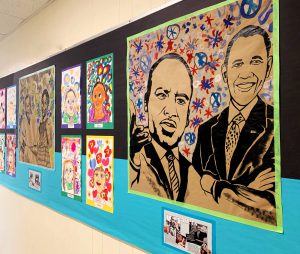 Although we agree with the NAACP that Black History should be celebrated and recognized year-round, the Queensbury Elementary School took this past February to highlight Black culture and art through a beautiful mural and curated classroom activities.

“When you typically look at traditional, classical paintings, there is little to no representation of Black and brown people in a positive light, and Wiley brought to light this disparity in diversity,” says Spath. Wiley uses traditional poses and painting styles and replaces typical white subjects with beautifully intricate backgrounds and portraits of black and brown people to create a new, jarring style and representation of black American people, ranging from people he met on the streets of Harlem, to fellow artists, and most famously, former President Barack Obama.

More information on Kehinde Wiley and his art can be found here.

QES librarian Sara Oliver curated a  month’s supply of great biographies and stories of black people in history.  A book was showcased each day in the daily announcements.  Class activities surrounded learning and celebrating black people in history in many areas such as math, science, music, human rights, and government. 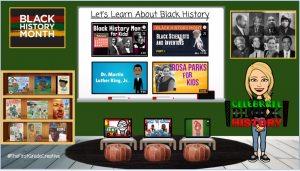 Here is a list of books that were a part of Black History Month readings: