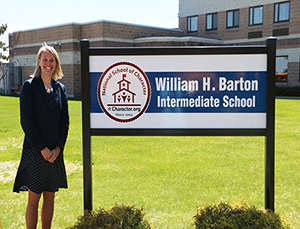 The Queensbury Board of Education appointed Gwynne Cosh as the district’s new William H. Barton Intermediate (WHBI) School Principal during its regular evening meeting on Monday, May 13. Cosh began her tenure in the district in 2016 as the WHBI Assistant Principal, a role she will remain in until the end of this school year. Prior to working in Queensbury, Cosh was a fifth grade teacher at the Hartford Central School District for nine years.

“Each morning as I pull onto campus, I am honored to be a member of the Queensbury Union Free School District,” said Cosh. “I have thoroughly enjoyed my role as an assistant principal for the past three years, and I look forward to continuing to work with the students, their families and the amazing team of educators at WHBI. This school is such a special place, where students are fully engaged in learning, are provided opportunities to become involved and are establishing long-lasting positive relationships with their friends and teachers. I am thrilled to have this opportunity to continue my career at Queensbury and expand upon the great work that happens each day here.”

As the WHBI Principal, Cosh will take over the role currently held by John Luthringer, who has been appointed as the district’s new Director of Instructional Technology. Some of the highlights of Cosh’s tenure so far, include: leading WHBI through the National School of Character application process, resulting in a 2018 award; collaboratively leading a Response to Intervention (RTI) team to restructure and create a systematic data-driven approach for a K-5 RTI program; continually refining character education core values in the school, and integrating Project Lead the Way into math and science.

“Over the past three years, Gwynne Cosh has exceeded our expectations as an assistant principal and has demonstrated strong, collaborative leadership skills,” said Superintendent Douglas Huntley, Ed.D. “As principal, she’ll be able to build on the work she’s already done as she transitions into this new role. I’m very excited that Gwynne will be leading WHBI and I expect she will serve the children, faculty, staff and community very well as a highly-effective principal.”

Cosh will assume her new role July 1; the candidate search and interview process for a new WHBI assistant principal is underway.