It was a special morning at Queensbury Elementary School and the William H. Barton Intermediate School, as staff members presented the annual Dr. Irion awards, recognizing a person from each building who has made a significant contribution to the school community. Nominations come from the staff and a committee is formed in each of the buildings to decide on the recipient. The award is in the memory of Dr. Irion, Queensbury’s Superintendent of Schools from 1973-1994.

Staff members nominate anyone they feel has had a positive impact on the education of students at QES and WHBI. Anyone is eligible for the nomination; faculty members, staff, support staff, custodians, or parents. Characteristics of a nominee include someone who shows devotion, allegiance, positive attitude and an excellent work ethic. 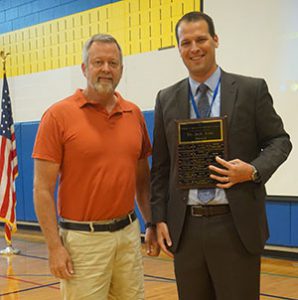 This year, QES art teacher Jen Spath and WHBI Principal John Luthringer were the recipients. Both Spath and Luthringer had no idea they were being honor

“It was really surprising and just so heartfelt,” said Luthringer. “I am so grateful to the staff for thinking of me in the same light as Dr. Irion,” said WHBI Principal John Luthringer. “I wasn’t here when he was here, but I’ve learned a lot about him over the last 11 years. To be thought of in any capacity that Dr. Irion was thought of in is a true honor.”

Dr. Irion’s son, John, attended both the QES and WHBI ceremonies on behalf of the family to recognize Spath and Luthringer. 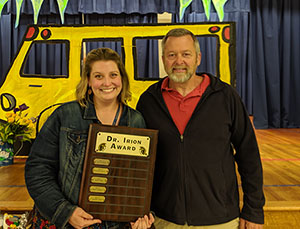 “While I did not have the pleasure of knowing Dr. Irion, it is no less humbling that I have been recognized as the type of person that reflects his true care and dedication to our school, our students and one another,” said Jen Spath. “I am so proud to be counted among the fabulous individuals who have received this award in the past and I have every intention of continuing my work in the award’s spirit.”