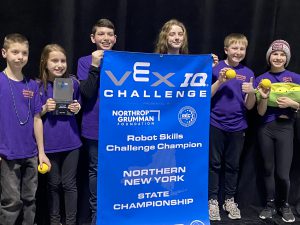 The “Radical Robots” competed in the New York state championship against 21 teams this past Saturday in Syracuse, NY. There, they placed 2nd in the Teams challenge and 1st in the Skills challenge with an amazing driving and programming run, therefore placing overall 3rd place in the United States out of 2,922 teams.

A round of applause for WHBI’s 4th and 5th grade Vex IQ teams, who qualified for the World Championship as well. The 4th grade team also took home the Excellence Award in their program.

Congratulations are also in order for Queensbury High School’s amazing accomplishment in hard work and teamwork by bringing home the State Champion title!

QHS won the Excellence Award, had the highest autonomous skills points, placed 2nd overall in skills, and were tournament finalists in the high school division. The high school is sending 2 teams to the world championship.

The next tournament, the World Championship, will be held in Dallas, Texas, from May 10th-May 12th, 2022. The World Championship will include teams from Japan, Canada, Taiwan, South Korea, New Zealand, United Arab Emirates, Columbia, China, Ghana, Morocco, and the United States.

Teamwork challenge: The teamwork challenge takes the brunt of the day.  It consists of a total 8 competitions, each 1 minute long, with another robot on the field.  The goal is for the 2 robots to work together to maximize the total score for the 1 minute.

Skills: Skills consists of 3 driving and 3 programming challenges.  Each challenge is one minute long and is executed only with 1 robot on the field.

This is the third year with the same team in VEX robotics.  All of the team members are trained in all the concepts of engineering, however, based upon the complexity of this program, team members specialize into 1-2 categories.  Each team member’s specialty is described below: