Mikaela Bee never thought she would be a writer when she was a student at Queensbury Union Free School District.

But the 31-year-old author has just released her fifth thriller titled, “Hazardous Conditions.”

“Writing was definitely not part of the picture at all until about a couple years ago,” said Bee, who still uses Mikaela Bee as her pen name. Her married name is Mikaela Stringer.

Bee wasn’t sure what she wanted to do after she graduated from Queensbury High School in 2010. She worked as a teaching assistant at the Prospect Center and did some waitressing on the side.

After she moved to Burlington, Vermont, she continued to work as a teaching assistant, but then the COVID-19 pandemic hit in March 2020.

“The classroom teachers were putting together packets and stuff,” she said, “but otherwise, the instructional assistants, they didn’t know what to do with us yet.”

With her pandemic-induced free time at home, Bee started to write.

“I was like, ‘OK, I’ve read a bajillion books, I might as well try writing my own,’” said Bee, who penned her debut novel, “The Lake House,” during the first year of the pandemic.

All five of her books are thrillers set in the region between Lake George and Burlington, Vermont. A couple of the books mention fictionalized towns based on local places.

And her latest book, “Hazardous Conditions,” places a serial killer in Lake George and mentions the towns of Warrensburg and Bolton in the plot. 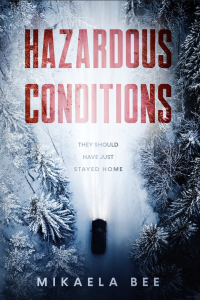 In the book, the older sister comes home to Lake George from the University of Vermont for Christmas Eve.

“This is their first Christmas together as a family without the dad,” she said, “so everybody’s kind of grieving and in a bit of a dark place.”

The younger sister — like Bee’s sister in real life — likes to ride horses, and the sisters travel to a remote location to the horse barn during a blizzard.

“It’s about their struggles on the way home,” Bee said. “They make it to the barn fine, but then the blizzard and other obstacles are on their way on the way home, and it turns into a whole disaster.”

Her next book will be the first in a three-part “Wedding Nightmares Series.” Her first draft “From This Day Forward,” is almost done, she said.

The author would love to eventually write full time, but right now she also works part time at a doggy daycare.

“It’s fun. I basically get paid to pet dogs all day. It’s like the dream,” she laughed. “Then I come home and I write for a few hours.”

Rainwater, who is now retired, said she was proud of her former student.

Bee said she encourages anyone who wants to write a book to try it.

“If I had any clue a couple years ago that people I’ve never met in my life would be reading my books and telling me it was their favorite book of the year,” she said, “I would never have believed them.”