Twenty-two students and 14 chaperones traveled to Caen, the Loire Valley and Paris, where they sang, bonded and entertained the French. 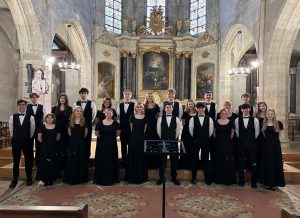 The vocalists performed three formal concerts and also entertained passersby on the street as well as an impromptu performance at an abbey founded by William the Conqueror. The mayor of Orléans, a city of about 115,000 people, attended their performance.

The group traveled and ate dinner together nightly — and even tried escargot.

During their time in Caen, the students performed at the Normandy American Cemetery. They also walked on Omaha Beach, making a real-life connection to the history lessons they have learned in school. 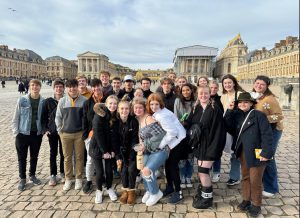 Senior Kindel Huffaker was touched by the meaning of the songs they sang at the cemetery.

“You don’t think of the songs in that context,” she said, “but then you’re singing them there, and you’re thinking about all the people who lost their lives, it just kind of takes on a whole new meaning.”

Senior Kendra Jones said she felt the irony of the beauty of Normandy, the site of the allied invasion during World War II.

“It’s hard to comprehend all the history there,” she said, “but it’s just so beautiful.” 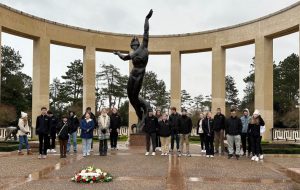 Senior Carter Sano said he enjoyed Caen and Paris, but relished the opportunity to spend time with his fellow vocalists.

“Before the trip we didn’t have too much time where we actually interacted,” he said. “But on this trip, it was 36 of us, and we were with each other constantly.” 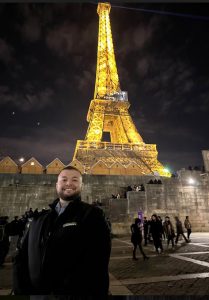 The Madrigals have traveled to Europe every other year for decades, but the trip hasn’t happened since the onset of the COVID-19 pandemic.

“We learn around 17-20 pieces just to travel to France with, so it’s a great way to motivate them to be really committed to the music,” said choral director Matthew Gaulin. “And then they get to share that with people around the world.”