Queensbury High School student Daniel Habshi crouched down and tried to make himself look like an egg. Then he played a fierce game of “rock paper scissors,” which ended in laughter.

Daniel was one of seven Queensbury UFSD students to participate in a student leadership conference titled “Students Mature in Leadership Experience,” held Wednesday, Nov. 16 at The Great Escape Lodge in Lake George.

The event was supposed to start at 8:45 a.m., but the morning snow delayed the conference start time by two hours. 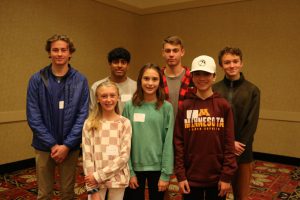 Students from the WSWHE BOCES region heard from keynote speaker Chris Bowers, a boisterous and entertaining man, who taught the students how to problem solve, ask for help and to lift others through encouragement.

“It’s been fun. He’s a really good person,” said Katherine Moro, a sixth-grade student. “And I think he has good stuff to tell.”

Katherine said Bowers inspired her to be herself.

Students also participated in a number of student-directed activities and interacted with kids from other schools.

School counselor Michelle Sullivan said she hopes the students who attended the leadership conference take the skills they learned and pay them forward.

“The simplest act of kindness can be transformative for anyone who they come into contact with,” Sullivan said. “It’s your mindset, which influences not only your life, but those you surround yourself with. Be you, basically. That’s the takeaway message, is to really be comfortable in your own skin.”