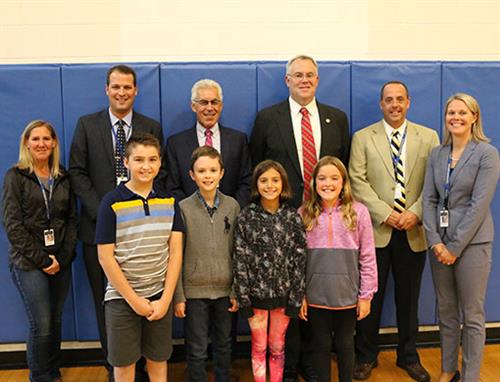 Ten years of hard work was commemorated at WHBI during a ceremony to celebrate the school’s 2018 National School of Character recognition. As only one of four NYS schools and 71 in the country to receive the designation this year, WHBI’s dedication to character education will now be on a national stage. Each year, Character.org and its state affiliates certify schools and districts that demonstrate a dedicated focus on character development with a positive impact on academic achievement, student behavior, school climate and their communities.

The road to this recognition began ten years ago at WHBI, when Queensbury’s Assistant Superintendent for Instruction, Kyle Gannon was principal. In 2010 and 2013 the school was awarded the New York State Emerging School of Character designation, followed by the NYS School of Character designation in 2015, when current QES Principal and former WHBI Principal Jessica Rossetti continued the accreditation process.

Three years later, under the leadership of Principal John Luthringer and Assistant Principal Gwynne Cosh, WHBI earned the prestigious designation of a National School of Character, in turn providing a wider platform for school leaders to share the successes of the Spartatude program. Spartatude promotes respectful, responsible behavior through expectations and activities that create a positive school environment where students feel safe and can achieve academic and social success.

“This award represents years of progress and development of our character education program,” said Luthringer. “It is a symbol of the work our teachers, staff, and students put into their roles each and everyday. Being named a National School of Character is validation that we are doing a lot of amazing things here at the WHBI!”

The national level of recognition reflects years of work by the WHBI Character Education Committee, consisting of educators, school leaders and parents, to establish a positive culture and climate at the school as well as throughout the local community.

“Our work and dedication to giving back to our school, families, and community is not finished,” said WHBI Assistant Principal Gwynne Cosh. “Spartatude defines the behavior we are all striving to have. We can be the change we wish to see in the world, starting right here in Queensbury.” 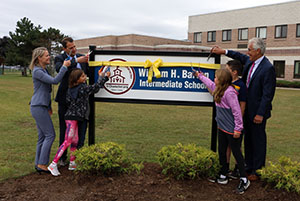 WHBI will hold the national recognition for the next five years and be honored at Character.org’s 25th National Forum on Character October 4-7 in Washington, D.C.

Since the inception of Character.org’s Schools of Character program in 1998, 547 schools and 35 districts have been designated as National Schools or Districts of Character, impacting more than 3 million people’s lives. Criteria for selection are based on Character.org’s 11 Principles of Effective Character Education, a framework to assist schools in providing students with opportunities for moral action, fostering shared leadership and engaging families and communities as partners in the character-building effort.